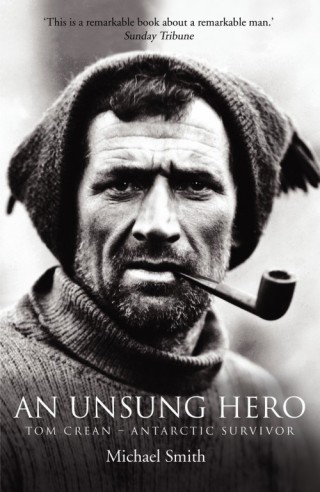 Tom Crean was an unassuming seaman from Ireland who distinguished himself as one of the hardiest antarctic explorers in history. He served twice under Scott (on the Discovery and the Terra Nova) and once under Shackleton (on the Endurance), both of whom held him in high regard as a supremely dependable crewman.

He proved his bravery time and time again. On the Terra Nova Expedition, while returning to base camp following a depot-laying trip, the ice on which he and his comrades Apsley Cherry-Garrard and Henry Bowers had been camping broke away and started drifting off, taking them with it, away from their sledges. Crean salvaged the situation by jumping across the broken ice floes to fetch help, saving the two men’s lives.

On another occasion, Crean, Edward Evans and William Lashly were trekking back to base when Evans was struck by slow blindness, and had to be aided by the other two. Soon he began to develop scurvy. With provisions running low, and 35 miles still to go to safety, it was decided that Crean would go alone. He set off with just three biscuits and some chocolate, and walked for 18 solid hours. He reached the base just in time to avoid a blizzard, and Evans and Lashly were soon saved.

In his native country, though he has been long admired, there is a perception that his legacy has been underappreciated. Michael Smith set out to restore Crean to his rightful place in history, with his book “An Unsung Hero; Tom Crean – Antarctic Survivor”. The book examines Crean from his early days working on the family farm in Kerry to his death in 1938, but obviously the book is primarily concerned with his polar adventures.

To write about Crean must have been a challenge. He was a modest man who did not seek fame and attention. Because of this, there is no record of him ever giving an interview to the press. He did not write an autobiography. He did not make speaking engagements. He left very little personal correspondence. Many other characters from the Heroic Age of Antarctic Exploration thoroughly documented their exploits; we have a wealth of diaries and memoirs covering every moment of every expedition, but Crean was a more private person.

The author makes a game attempt to provide a full account of a man whose thoughts and feelings largely remain a mystery. Smith knows that it is Crean’s actions which must speak for him, not his words, and wisely avoids unnecessary interpretation. To use an odd turn of phrase, he lets the story tell the story. He paints a strong picture of a loyal, reliable, and unerringly brave man. The book is well-paced and as well-researched as can be considered possible with a such an elusive figure.

There are, however, stretches of the book where the relative lack of information about Crean becomes apparent; there are times when the author must make do with talking about the general work of the expedition with only occasional sentences to remind us of Crean as a specific presence. He was, after all, part of a crew. Such sections are excusable, and do not hinder the book. It is in these moments that the author provides a good overview of the various voyages. In many ways the book would serve as a solid introduction for those who wish to start learning about the Heroic Age (This does not mean that the book would hold no appeal to those who are more well-versed in the era, as there are some new insights to be gleaned).

Crean comes across as a thoroughly likeable person, full of dedication; a good-natured man who kept his spirit up (and the spirits of everyone around him) in the midst of one of the most inhospitable parts of the world. He was more than capable of emotion, but would not let circumstance get him down for too long. As with Shackleton, there is much a Stoic could learn from such a man as Tom Crean.

Smith has written an exciting, inspiring book, one which makes a strong case for recognition of this previously under-appreciated explorer, and one which I heartily recommend.